Living in Florida longer than any other state, and making my career as a meteorologist in a tropical climate, I look forward to Sept. 10 every year. Why? Because Sept. 10 is the official peak of hurricane season for the Atlantic Basin (the Atlantic Ocean, the Gulf of Mexico, and the Caribbean Sea).

It’s all downhill from then to the end of the season, Nov. 30. (In the Pacific Ocean the season is slightly different, beginning earlier on May 15 rather than June 1, and ending Nov. 30).

If you live in Florida, too, or any other hurricane-prone area, don’t breathe a sigh of relief quite yet. The decline past the peak to the season’s end is a slow one, not steep.

Numerous memorable hurricanes have occurred beyond the peak date. Hurricane Jeanne made landfall in Central Florida at the end of September 2004, and Hurricanes Matthew (2016) and Michael (2018) impacted Florida in October. 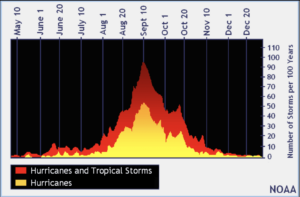 Tropical storms and hurricanes can form in any month of the year, but it’s during the six-month period we call “hurricane season” that they are most likely to form. This is when conditions in the ocean and atmosphere are most favorable.

Hurricanes are fueled by heat. They only strengthen when upper ocean water temperatures reach 80 degrees. Beginning in June, the Atlantic water warms, reaching its warmest levels in August and September, which is why the peak of the season occurs then.

Also, it’s during the summer months that vertical wind shear, (abrupt changes in wind direction and speed with altitude), weakens over the Atlantic Ocean. Without strong winds up high to rip apart storms as they form, hurricanes can grow more easily. Shearing wind disrupts the vertical flow of air, which a storm needs to develop. Wind shear is our friend when we want hurricanes to break down and fall apart.

Once October hits, the air and ocean temperatures start to cool down, and the wind shear kicks up again. That means hurricanes are less likely to form, and the official season comes to an end.

It Only Takes One

An average hurricane season produces 14 named storms. Of those 14, on average seven become hurricanes, and three of those reach major status (winds 111 mph-plus).

Whether or not the forecast is for an above-average or below-average season, it’s important to remember: It only takes one.

It’s also important to remember, as in the case of recent Hurricane Ida, it isn’t only coastal communities that are impacted by hurricanes. Ida made landfall in Louisiana but continued northeastward, spawning tornadoes in the Washington, D.C. area, and killing 43 people in floods across four states.

As you traverse through these final weeks of the season, remember: Don’t be scared. Just prepare.

Check out these tips I shared with Growing Bolder to help prepare for the rest of the hurricane season.