It’s been the topic of conversation for weeks now. It’s warm in Central Florida! And it’s not just warm here. You’ve probably seen stories on the news of cherry blossoms blooming in Washington DC — in November! — and a lack of snow across the Northeast. You may have heard from your friends up north about record-breaking heat and their Thanksgiving dinners wearing shorts. 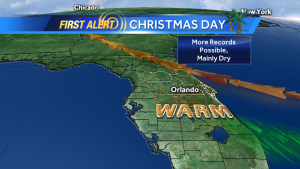 So what’s the deal? Why is it so warm? Is it global warming? Is it El Nino? Is it a fluke? Is it just “Florida weather?” The answer is probably a combination of all of the above.

You can’t blame just one thing for this warm streak. And you have to be careful saying “I’ve never seen it this warm in December before!” Sometimes our memories fade. Sometimes these things may have occurred before, but it wasn’t as widely broadcast (social media has changed us all!).

No matter what you believe about global warming, there are two things for certain: the earth has gotten warmer in recent years (The causes are a whole other blog and debate) and individual weather events, like daily highs and lows, can’t be attributed to global warming. It’s more of a pattern and seasonal thing. It’s about climate more than weather.

We have had a strong ridge of high pressure parked to the east of Florida this Fall. It brings warm air into the state (south wind) and blocks any cold air from coming in. We also haven’t seen a strong polar vortex (Remember hearing about that last winter when we had record-breaking cold and snow across the north?). The cold air in Florida has to come from somewhere. If it’s not extra cold at the North Pole and into Canada, there is no cold air to filter down to Florida.

I don’t believe the warmth is just a fluke. Weather always happens for a reason. The reason may be small (micro — like a ridge of high pressure) or part of a bigger global pattern. You know that whole butterfly effect thing? It’s a scientific theory that if a butterfly flaps its wings on one side of the earth, it changes the weather on the other side of the earth. Seems odd, and yet there is some truth to it. Wind patterns are connected all around the world.

Take El Nino for instance. El Nino is a phenomenon that happens in the Pacific Ocean off the coast of South America. When the water gets warmer than average, it’s known as El Nino, and when the water gets colderthan average, it’s called La Nina. Those statements are over-simplified. Both events are really complex weather patterns which occur when the ocean temperatures change significantly in the Pacific Ocean near the equator. When one of these events occur, it impacts the global weather pattern, and therefore affects the weather in Florida.

In past years when we’ve had a strong El Nino, like we’re experiencing now, we’ve often had a mild or warm fall/winter and then a stormy winter/spring. Of course, there are always exceptions when it comes to weather, but the overall trend is that we have a warm December in El Nino years.

The last time we had a strong El Nino was in the winter of 2006-2007. That December, Orlando experienced 24 days with above average high temperatures, and only 7 days cooler than average.

Eleven days that month were in the 80s, 17 days were in the 70s and only 3 dropped into the 60s for highs. So far this year, Melbourne has had its warmest December on record. Daytona Beach has had its second warmest December, and Orlando is the 3rd warmest, behind 1971 and 1931. We still have another week of warm temperatures, so these records could actually end up higher. 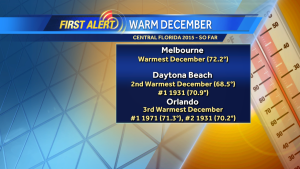 The warm December in 2006 was followed by a stormy January and February in 2007. Several cold fronts brought round after round of strong and severe thunderstorms.  In the early morning hours of Groundhog Day, three tornadoes ripped through Central Florida killing 21 people. The first was an EF-3 with winds of 155-160 mph in The Villages/Lady Lake. This tornado killed eight people. The second EF-3 devastated Lake Mack/DeLand and killed thirteen people. The third tornado in Volusia County was an EF-1 with winds at 100-105 mph near New Smyrna Beach.

There is no guarantee that this winter will end up as stormy as 2007, but there’s a good chance. With a strong El Nino in place, and a warm December already in the books, the likelihood certainly exists. Weather happens in cycles and follows trends. But it’s also unpredictable and constantly changing. There’s one thing I’ve learned from my 20+ years of forecasting: You can never say “never” when it comes to weather!