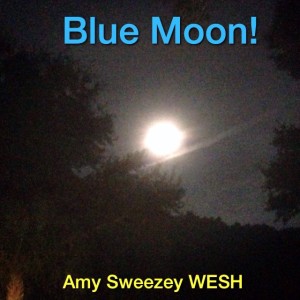 You know it’s a cliche about things that rarely happen… but did you know it has real meaning based in science?

You may have heard that a “blue moon” refers to the occurrence of a full moon twice in one calendar month. Since a full moon cycle happens every 29.5 days, it stands to reason that every so often, there would be a full moon at the beginning of a month (like there was on July 1, 2015) and another at the end of a month (July 31st). Sometimes it happens every 2-3 years, and sometimes we’ll have 2 full moons in a month more than once in a year.

This has become the traditional explanation of a full moon, called the “calendar definition,” but this meaning actually came about on accident. There was an article back in the 1940’s printed in Sky & Telescope magazine that misinterpreted the actual definition of a blue moon. Because of that article, this new, slightly different, meaning stuck.

The original definition was meant for an occurrence even more rare. It’s known as the “seasonal definition” and refers to an extra full moon happening in one season rather than in one month. Essentially, it was the name for the third moon in a season that had 4 full moons.

Either way, it will be 2-3 years before we have another one. So this really is happening…once in a blue moon!