I know what you’re thinking…. “Sometimes?!? Those weather people are the only ones I know who get paid to be wrong every day!!”

Sure, we laugh about it, but I also understand an incorrect forecast can be frustrating. We plan so much of our lives around the weather… backyard BBQ’s, outdoor festivals, sporting events, yard work, even some livelihoods and jobs. Research tells us that a local weather forecast is the number one reason people watch television news.

I often tell schoolchildren that if I get the forecast wrong every single day, I would probably get fired. But if I get the forecast wrong once in a while, I won’t get fired. Being wrong is just part of a weather forecaster’s job. After all, it’s a prediction, a forecast, an educated guess. It’s not an exact science. Now, it is based in science. And despite what you may think, meteorologists do not throw darts at a dartboard to determine if they should say today will be sunny or cloudy. 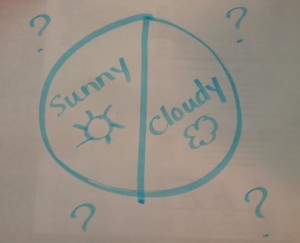 Despite what you may have heard, there is a lot that goes into making a weather forecast. Being familiar with an area and its weather patterns, the consistencies and inconsistencies, certainly helps. But an understanding of the atmosphere and its fluid motion is at the heart of forecasting.

Let me use this example: I have always been terrible at skipping rocks. I have friends who can toss a pebble toward a body of water and make it bounce more times than I could count. Me? No matter how much spin I put on it, or how many times I practice, I have just never gotten the hang of it. I toss my rock toward the water and it invariably goes under in one giant plop.

Picture my rock as it plops into a still body of water. It creates a little ripple that pushes out from either direction where the rock goes in the water.
Imagine if you were given an assignment to determine what time the wave from that rock was going to hit the other side of the pond.
There are a lot of variables you would need to know in order to figure this out…

* How big is the rock and how much does it weigh?
* How deep and how wide is the water
* Is the wind blowing – how fast and from which direction?
* Are there any fish in the water swimming?
* What is the terrain like at the bottom of the pond? –  Is it all flat or are there piles of grass?

Now imagine if you took all of those factors into account, and you could come up with a math equation that would determine exactly what time the wave would hit the other side of the pond. As soon as you have that figured out, a kid jumps in the pond a few feet away from you.

Now what? How will that affect the timing of my wave? Now there are even more questions to answer and to add to the mathematical equation.

* How much does the kid weigh?
* How close was he to my rock when he jumped?
* Were his arms in or out?
* At what time did he jump in the water compared to when my rock plopped into the water?

See how it starts getting so complicated and complex?

When you think of it that way, suddenly this “easy” job of weather forecasting doesn’t seem so easy anymore. 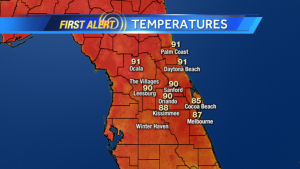 Anyone who has ever studied meteorology (including just a beginner college class) will tell you, the more you know about the atmosphere, the more you realize you don’t know, and how much there is to know. It is interesting and fascinating but also complex and confusing.

Here’s the thing. It’s not brain surgery. I’m not a neurologist. I’m not curing cancer. I’m not a school teacher! I’m not doing any other number of things that really deserve kudos. Every once in a great while I get to help someone stay safe from an extremely dangerous situation (like a tornado or hurricane). But on a day-to-day basis, I just talk about the weather. I take pride in my work. I want to be accurate. I want to be clear. I want you to watch MY station rather than any other of the good stations in town. But sometimes I get it wrong. We all do. It’s part of the job. I try to learn from it. I accept it. I hope you will, too.


Deprecated: Directive 'allow_url_include' is deprecated in Unknown on line 0