September 5, 2004: the day Hurricane Frances made landfall through Central Florida. 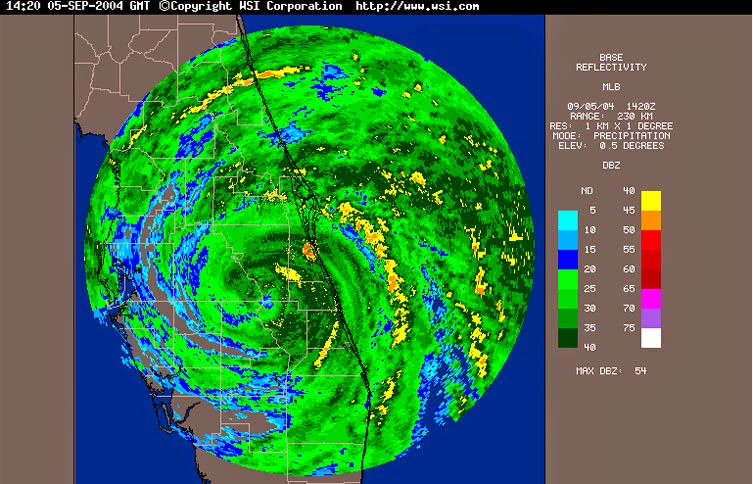 Our hurricane-seasoned eyes were wide open after Hurricane Charley beelined its way straight through Central Florida just a few weeks earlier, hitting Daytona Beach ON ITS EXIT with 106 mph winds. Now Frances was headed our way. And it was daunting. We were nervous. Frances was a massive Category 4 hurricane – much stronger than Charley. Charley had made landfall as a Category 2 (it was later upgraded to a Cat 3) and we had seen what that could do. We were scared. We were stockpiling water and supplies. A lot of the “cleaning up” that needed to happen after Charley still hadn’t happened yet. Piles of tree limbs and debris lined our streets. Blue tarps covered roofs. Home improvement stores had sold out of lumber and hurricane shutters.

As Frances moved into the Central Bahamas, it had weakened some into a Category 3 but the forecast “cone” was still pointed right at Florida.

Like a lot of Central Floridians, the entire back wall of my house is windows and sliding glass doors. We didn’t board those windows for Charley. We did for Frances. We had seen first hand how a 100 mph wind could use a small tree limb as a projectile.

By the time, Frances moved through on September 6, I had worked 12 days straight at WESH on a schedule of 12 hours on, 12 hours off. Of course, the 12 hours OFF weren’t completely OFF. Included in that time was trying to get back and forth to work in the wind and rain during many hours that were under a curfew. No one was supposed to be on the roads unless absolutely necessary. Sometimes I had to find an alternate route because a giant tree blocked my path. I was one of the lucky ones who lived close enough to work that I could get home. I didn’t have to sleep at the TV station in my sleeping bag, like some others. I brought it with me every day, though, just in case I wasn’t able to get home at the end of that days’ 12-hour shift.

At my house, we lost power for 3 days. Have you ever lived without electricity for 3 days? Wow. We lost all the food in our refrigerator and freezer. We slept with no air conditioning and no fans in 80-degree sultry heat. Co-workers who lived on the beach had no power for 7-10 days. They were sleeping at work and at hotels near WESH. We were sharing our TV clothes with those who couldn’t get home to change.

It was a crazy 2 weeks. But we made it through and only had to look around to see how fortunate we were. Many of our friends lost their homes, or their roofs, or even their lives. My neighbors across the street had a giant tree fall on their house. It took them nine months to rebuild and get back into their home.

Oh, and did I mention, I was 18 days from the birth of my first child? So I was uncomfortable and hungry and exhausted, and a bit nervous I would go into labor while on TV without being able to get to the hospital. It was a little stressful for me, personally.

Despite what seemed like an eternity of rain, we really didn’t end up with THAT much from Frances (compared to Tropical Storm Fay which came along a few years later). Daytona Beach recorded 9.96,” Orlando 6.5,” and Melbourne 7.95.”  The rain bands wrapped around the storm so quickly, they didn’t have enough time to really accumulate. Wind gusts were a bit more impressive. Merritt Island Airport recorded a gust of 78 mph, Lake Toho 71 mph and Leesburg 52 mph.

Now 10 years later, it’s been a relatively quiet hurricane season so far. We’ve had 4 named storms: Arthur, Bertha, Cristobal and Dolly. Three of those reached hurricane status but none directly impacted Florida. The peak of the season is just 5 days away, on September 10. We’ll likely have more storms develop before the season ends officially on November 30. Frances is a good reminder to evaluate your hurricane plan, know that a hurricane HAS and CAN hit Central Florida, and be sure you are prepared if a hurricane does head this way in 2014.