Can you believe it was 9 years ago today that Hurricane Charley roared across Central Florida? August, 13, 2004…. that was Friday the 13th, by the way. Charley was the strongest hurricane to hit the United States since Andrew in 1992. Its swath of destruction started in Punta Gorda near Port Charlotte, where it made landfall as a Category 4 storm (150 mph winds), and stretched to Daytona Beach as it exited the state, still recording hurricane force winds at 80 mph. It was a small storm (in size) and moved quickly (taking just 12 hours to move across Florida) but it packed a powerful punch. Even though the strongest winds were felt at Port Charlotte, serious damage was done across Central Florida, too… leaving thousands without power for days and causing nearly seven billion dollars in damage across Florida. 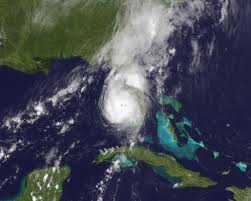 Every year when August 13 arrives, I am reminded what it’s like to live through a hurricane passing across Central Florida, not one… but three! I was here in 2004. I was 8.5 months pregnant with my first child. I was working 12-15 hour days. I had my windows boarded up. I lost power. I bought a generator after Charley. A tree fell on my house sending water pouring into my clothes closet. My lemon tree was uprooted and destroyed. I had blue tarps on my roof. I had to find alternate routes to work because giant trees were blocking my path. I started going a little stir crazy from being cooped up in a dark house with boarded windows and no air conditioning. I lived through the inconveniences right along the side of you…. and now every year, I make sure I have a hurricane kit and a plan in place for my family before a storm arrives. Charley was my personal wake-up call.

Charley intensified quickly as it approached the southwest coast of Florida. In fact, it deepened so much that it broke the wind sensor at Punta Gorda after recording 90 mph sustained winds and a gust to 112 mph. The National Hurricane Center says it’s entirely possible that Charley was even stronger than believed based on later damage estimates:
“Since it is presumed that the center was closest to the Punta Gorda site at the time of lowest pressure, and since Charley’s maximum winds covered an extremely small area, it is highly likely that much stronger winds would have been observed at the site, had the wind instrument not failed. Instrument failures remain a chronic problem in landfalling hurricanes. Based on the few wind sensors that did
not fail, Charley carried strong winds well inland along its path across the Florida peninsula. For example, Orlando International Airport measured sustained winds of hurricane force (69 kt/ 79 mph), with a gust to 91 kt / 105 mph),” according the official report from the National Hurricane Center.

In the early hours of Friday, the center of Charley looked as if it was going to make landfall near Tampa. This would have sent the strongest winds north of Central Florida. But by late morning on the 13th, the center of the hurricane began to shift slightly to the right. As it began to strengthen and kept turning closer to Florida, the hurricane eventually made landfall in the evening hours and continued on its northeast track toward Daytona Beach. 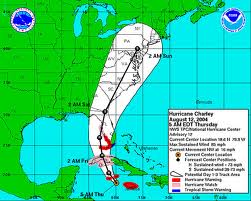 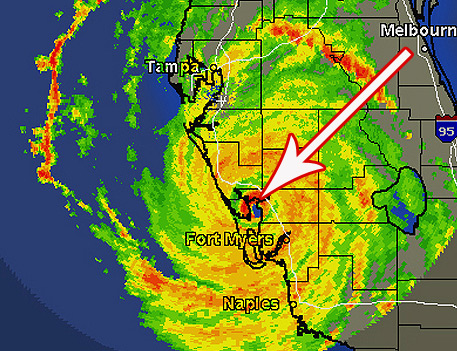 Charley produced five tornadoes in Central Florida (2 in Polk County, 1 in Osceola County and 2 in Volusia County). The strongest tornado was an F1 in South Daytona Beach that caused a quarter of a mile long track of damage.
After Charley, Central Floridians quickly learned what it was like to live without electricity for days or even weeks. Debris was piled, sometimes feet high, along curbsides; blue tarps covered leaking roofs; schools were closed; windows remained boarded up… especially once word of yet another storm was headed this way… Frances. 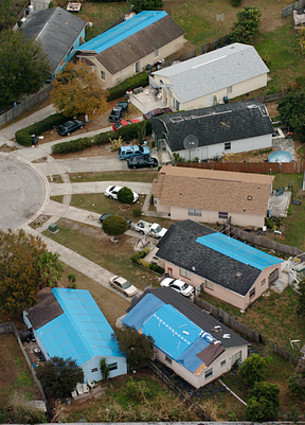 Little did we know that two more storms would beeline across our area over the next 6 weeks. Hurricane Frances sat off our east coast over Labor Day weekend bringing an average of ten inches of rain. It finally made landfall near Hutchinson Island as a Category 2 hurricane. Then, Jeanne made landfall at the end of September. It was a “major” Category 3 hurricane with winds estimated at 121 miles per hour.

We’ve had a quiet season so far in 2013, with just 4 named storms and no hurricanes. But the peak of the season happens in early September… and it looks like things are about to start ramping up. Don’t be caught unprepared like many of us were in 2004. Have a plan and be safe!