Here is the list of storm names for the 2015 Atlantic hurricane season: 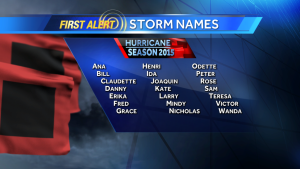 There are six lists of Atlantic hurricane names that are decided well in advance of the current year and get rotated every six years. If a storm is memorable and its name is “retired” by the World Meteorological Organization (WMO), that name is replaced on the list the next time it cycles around. As long as the name “Ana” does not get retired from this year’s list, it will appear again as the “A” name storm in 2021.

There are always 21 names on the list, in alphabetical order, with a few letters getting skipped. The “gender”of the storm name rotates, too. Notice the “A” storm is a female name, “Ana,” followed by a male name, “Bill.” Next year, in 2016, the “A” storm will be a male name and “B” will switch to female.

Despite the male/female names, hurricanes are not people. It’s still proper grammar to refer to a storm as an “it” rather than a “he” or “she.”

If more than 21 storms form in one season (like happened in 2005), the Greek alphabet is used to name the additional storms in that year.

If you were hoping to have your name added to the list (you’d be surprised how many people ask this question), it’s probably not going to happen. So much for Hurricane Amy! The WMO follows some strict guidelines when choosing names. You can read more about their process here: WMO STORM NAMES
If your name is on the list, it’s random. And you’re either lucky… or unlucky… depending on how you look at it.

Here is another great link from the National Hurricane Center with everything you’ve ever wanted to know about the history of naming tropical cyclones: NHC STORM NAMES